The Italian Dolomites are an impressive group of mountain peaks, forming a natural border for much of the northwest of Italy. They are stunning, which is why we love visiting each year. We even go as far as to say that no trip to Italy is complete without a visit to the Dolomites.

Each Giro d’Italia and on many of our custom Italian tours, we encourage guests to visit this wonderful region and experience its raw natural beauty. Many locations are UNESCO World Heritage sites due to the unique and spectacular mountains. And there’s so much more to explore! So, if the Italian Dolomites are not on your list of cycling routes, this blog will convince you.

First, let us get to know a little bit about the Italian Dolomites.

What are The Italian Dolomites?

As mentioned, they are a group of mountain peaks found in northern Italy, bordering Austria to the north and the Venetian plain to the south. Part of the Southern Limestone Alps or the mountains themselves is distributed across Trentino, Alto Adige, and Veneto. These portions are a part of Belluno, Bolzano, Udine, Pordenone, and Trento provinces.

The Dolomites cover about 100km of the area from east to west and 90km from north to south. The mountains have approximately 15 ranges with an average height of 3,000 metres. Here, a relatively small area is famous for new and experienced cyclists through the Maratona dles Dolomites and, of course, Giro d’Italia.

It’s worth mentioning that the Dolomites are a part of the Italian Alps. Even so, they are separate from the other famous climbs, namely Stelvio, Mortirolo, and Gavia, which are in the Bormio region. Some people confuse these areas as being in the Dolomites, we’ve helped you avoid the same mistake!

Now that we’ve got your attention, it’s time for us to highlight our favourite places to ride and visit in the glorious Italian Dolomites. 1. The Most Beautiful Route in the Dolomites: The Sella Ronda

Around 60km in length

Here’s one of the most incredible loop rides you will likely experience. The Sella Ronda sits firmly in our Top 5 rides of all time – and you’re about to find out why!

If you Google, “What are the most beautiful routes in the Dolomites?” the Sella Ronda will always appear in your search results. The ride circumnavigates the Sella Group of mountains (a UNESCO World Heritage Site) and the Piz Boè peak at 3,151 m (10,338 ft). En route, you’ll pass over four mountain passes where two of which are the region’s highest road passes: 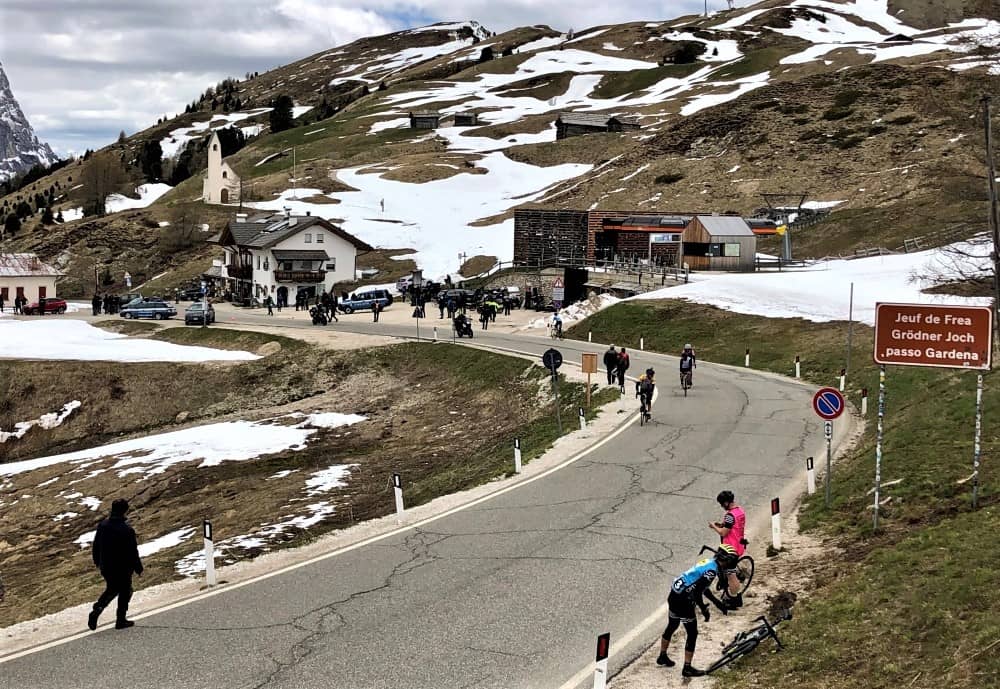 The beginning of the ride is understandably daunting, even for experienced cyclists. However, it’s easy to achieve and enjoy as you’ll commence at a reasonable altitude. The trick is to have a day in your program so you can relish the experience. The route is specially designed by nature for cyclists looking for wonderful panoramas and exhilarating descents. The route can be ridden in either direction with four valleys to choose from surrounding the Sella Massif:

Several cable cars and chairlifts are available if you prefer an offroad version, and feature several superb descents. However, they’ll require a medium level of cycling experience.

The on-road cycling or off-road Mountain Bike tour duration will vary depending on your skill level but generally take between five to nine hours with a lunch break included.

In total, the road cycling route is around 60km in length. We guarantee you’ll love this ride. There’s a wow moment at every turn. 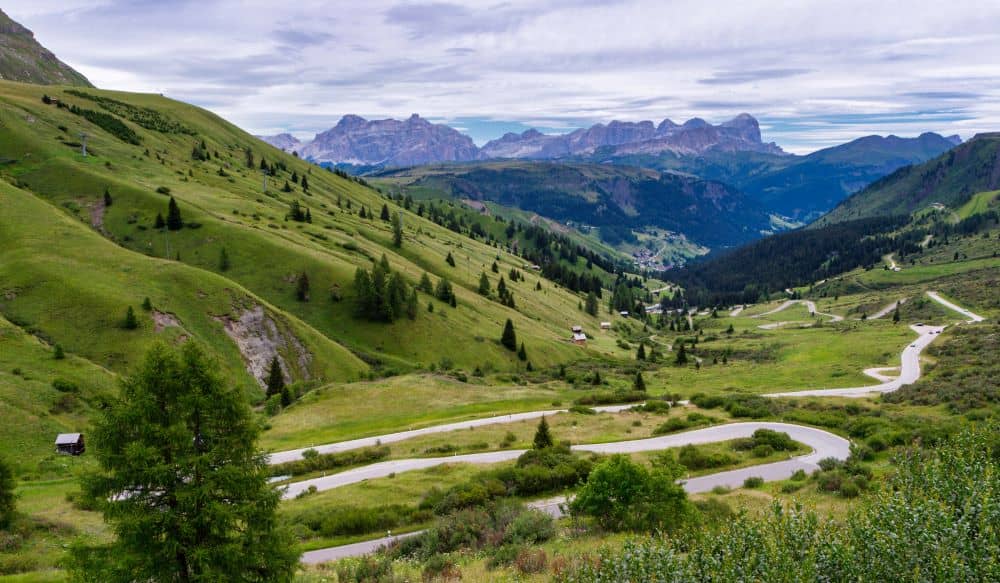 2. The Giro d’Italia and the Tre Cime di Lavaredo
The Three Peaks of Lavaredo in the Dolomites

The famous Tre Cime da Lavaredo peaks in the dolomite mountains are a prominent World Heritage Site. The three stunning battlement-like peaks, which are as follows, consist mainly of dolomite:

A stunning loop ride in the shadows of the Tre Cime di Lavaredo starts and finishes in the town of Cortina d’Ampezzo. You’ll ride roads made famous by the Giro d’Italia and, in particular, the 1968 Giro d’Italia. The breathtaking switchbacks make an already recognised Dolomite climb an icon.

Tre Cime di Lavaredo is an epic climb. For travellers, it’s a popular visitor spot, but for serious cyclists, it’s the journey that truly matters. Some of the most notable names that conquered the climb are Felice Gimondi, Giovanni Battaglin, Luis Herrera, and of course, the legendary Eddy Merckx.

In 1968, Eddy was a promising 22-year-old cyclist who introduced himself to the cycling world by taking the stage in blizzard conditions and crushing his competitors, including the GC favourites.

On this loop ride, you’ll pass over the same route as the Passo Tre Croci climb. The crystal clear, high mountain lake of Misurina is en route, cycling through the brilliant scenery. It’s a must-see! Finally, you will finish on the steep path at Rifugio Auronzo to view the impressive Tre Cime peaks before descending via an alternative route down through the valley roads to Cortina. 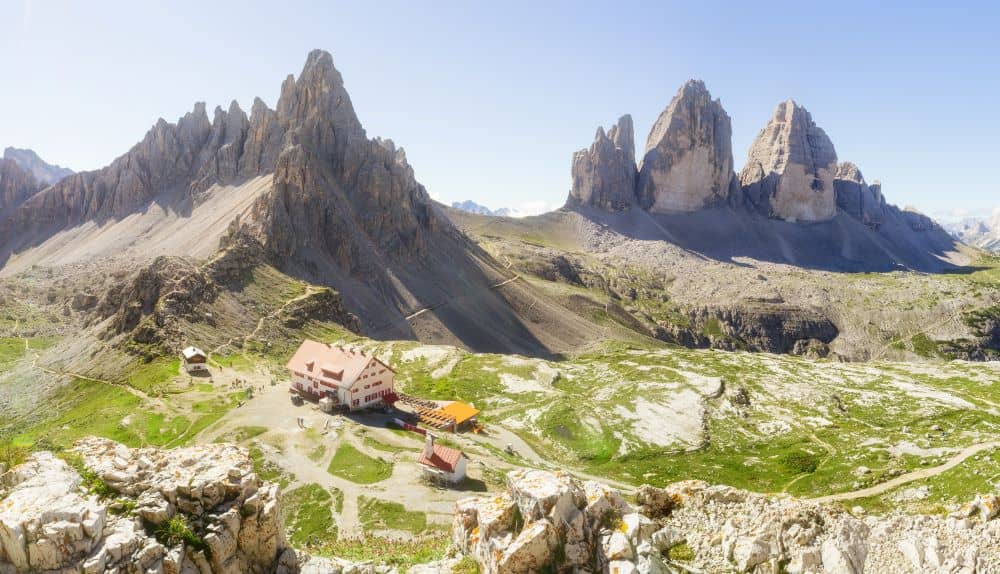 Is time on your side? If so, here’s a suggested “Allterain” route to consider: The Trans-Dolomiti. Situated in northeast Italy, Trans-Dolomiti is simply gorgeous. It’s the best way to see and admire the rugged mountain peaks face to face. You’ll be greeted with stunning vistas and some challenging paths, thanks to the rocky roads. However, there are opportunities for some fun single-track rides. This is the route that will get you going up, down, and around as you bear witness to the beautiful mountain range.

The trans-East-West Dolomites route starts in Tarvisio near the border with Austria and Slovenia. It’s a fairly friendly route, combined with a few short climbs. You’ll ride through the beating heart of the Dolomites before completing the journey at the university town of Bolzano, the Italian/ German-speaking capital of South Tyrol.

While in Bolzano, take time to visit the display of Otzi “The Iceman” at the South Tyrol Museum of Archaeology. It’s an incredible display of the mummified remains of Otzi, who lived between 3350 and 3105 BC, which were later discovered in 1991. They are believed to be the oldest mummified remains in Europe.

All in all, the Trans-Dolomiti is rated seven out of 10 when it comes to difficulty. This rating is based primarily on the amount of climbing you need to do. Sometimes, there are steep roads that will take you up the mountain, which may be challenging depending on your skill level and other factors, such as your strength, dedication, toughness, and the weight of your bike. Descents feature hairpins and can go from steep to very steep with some stony tracks. These parts of the route require a bit of mastery with at least some essential mountain bike experience and skills. 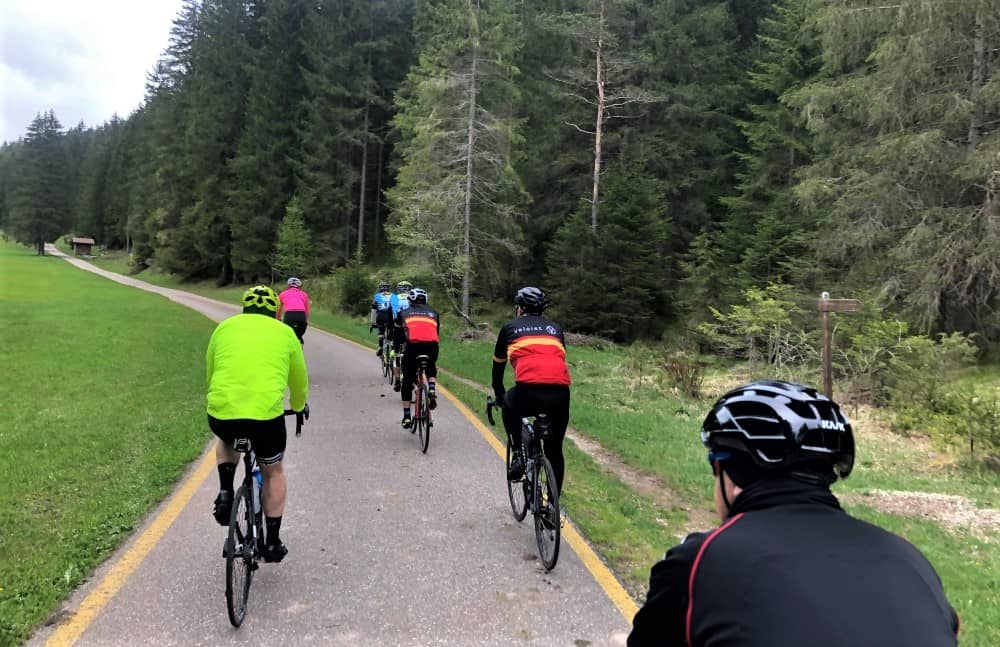 The popular Drava River cycling tour path starts in the shadows, specifically on the northern side of the Dolomites in the South Tyrol town of Toblach. This five-star, mostly slightly downhill cycle touring route follows the Drava River valley downstream to the east and finishes in Legrad, Croatia.

As mentioned, the 510km cycling route starts from the Drava River itself, which is in Toblach, Italy. It then crosses Austria to Slovenia, running on to Croatia, where it ultimately stops at the confluence of the Mura and Drava Rivers, just next to Legrad.

A portion of the cycling touring path, approximately 145km, extends through Slovenia. Most of this part is down less-busy roads and controlled routes. This route is recommended mainly for people in good shape, but you will always find suitable elevations for your skill level. Note that there are various types of mixed surfaces in this cycling route. There’s also a tough ascent that you should expect between Podvelka and Lovrenc na Pohorju.

The Drava Cycle Path lets you explore the wonderful landscape featuring mighty forests and some of nature’s marvels. There’s a UNESCO World Heritage site, particularly the UNESCO Karavanke Geopark. The river valley cycling path offers an adrenaline rush with a challenging yet straightforward route with the most beautiful views, either from the top of the mountains or down the Peca underground. You’ll find it to be one of the most beautiful cycling routes in Europe. Ready to join us in The Dolomites, ITALY?

If you would like the opportunity to experience the beauty, delicious food, great cycling, and stunning sights of Italy and the Dolomites, then come ride with us on an Ultimate Giro d’Italia Tour. Alternatively, we can create a Bespoke, Self Guided, or Custom Italian, Dolomites cycling and or non-cycling vacation for you.

For more information, please reach out to our team. We’re happy to schedule a video call to talk through your needs and questions, so get in touch with us today!