If someone would ask what we love about Tuscany, our immediate response is, “What’s not to love?” It’s true! We daresay that many of the quintessential Italian landscapes are in Tuscany. It is one of the most beautiful regions to visit, from its historic towns and villages to the places immortalised by the Giro d’Italia and the famous Strada Bianchi one-day cycling classic race held in the region.

Below is a list of the locations we love to visit and ride in Tuscany. Plus we have an added special treat, we asked our good friend, Australian professional Cyclist and Olympian Grace Brown, to share a few of her favourite rides in Tuscany. Now, if you’re a huge road racing cycling fan, you may already know who Grace Brown is. She began her professional cycling career in 2015. A few years later, Grace emerged victorious in the Australian National Time Trial Championship in 2019. Grace has quickly risen to the top of Women’s professional cycling in Europe and was recently named Australian’s Women’s Cycling Rider of the Year in late 2021.

Grace rides for a new team in 2022, joining the French Women’s World Tour team FDJ Nouvelle-Aquitaine Futuroscope. She never fails to impress us with her tenacious adaptive approach to professional cycling. It’s been a joy to play a small part in her continued success as a professional cyclist as her cycling skills and technical coach. 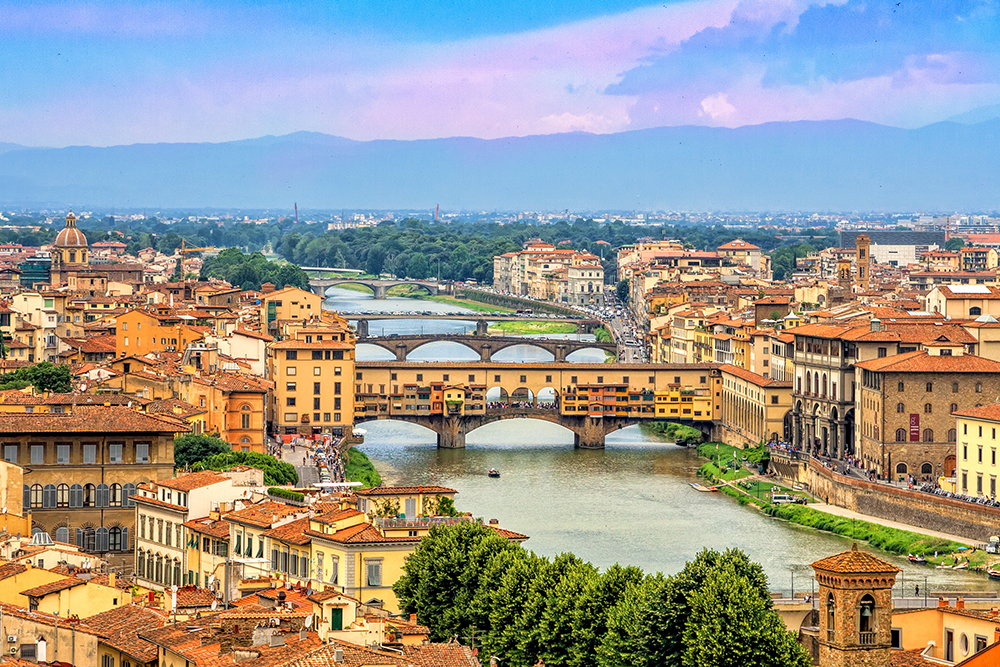 Tuscany at a Glance

It’s difficult to summarise everything Tuscany can offer in just a few sentences. But to make it short, this region has it all. You will quickly fall in Love with Tuscany – we know we have – because of its delicious food, beautiful landscapes, unique architecture, and culture. To say that it has an interesting history is an understatement. Tuscany is where the Italian Renaissance was born. Unsurprisingly, it’s filled with dozens of museums housing some of the world’s artful treasures.

Tuscany is made of gently rolling hills, lush vineyards, and seemingly endless beautiful castles. These sights are among the reasons why we love cycling in the region. Plus, the hamlets, churches, and houses that dot the narrow country roads are the perfect scenery as we get to the hilltop towns. 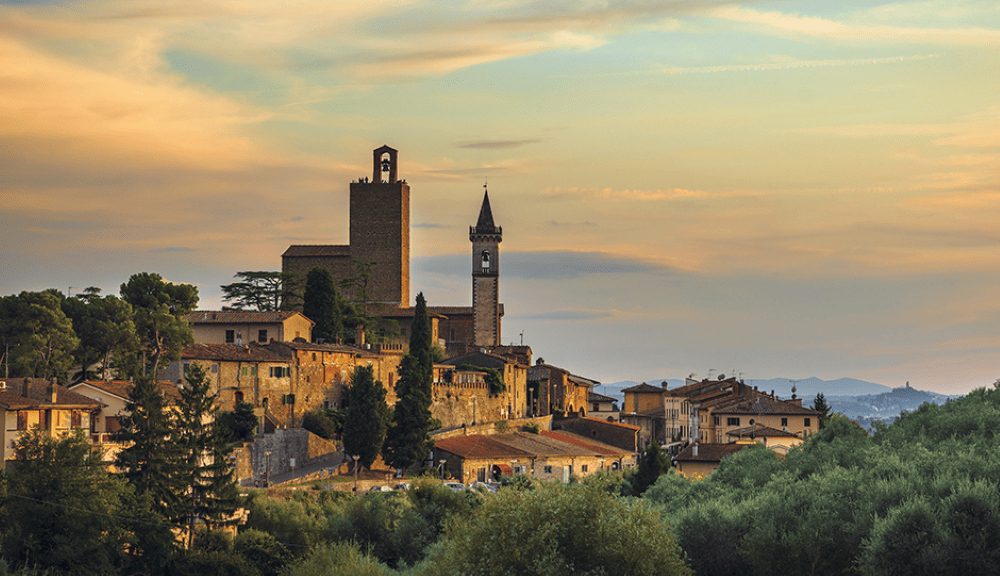 Our Top Places to Visit in Tuscany

Ready to be enthralled by Tuscany? Don’t miss these locations to see the best landscapes and exquisite natural and manmade gifts that the region has to offer: San Gimignano, a historic hill town in Italy that is famous for its medieval towers

For some food choices, pici is a must-try, which is one of the traditional dishes of Siena. Pici is similar to spaghetti, but it’s fatter. Desserts are interesting local snacks like ricciarelli, a biscuit made with almonds.

Meanwhile, for Pisan cuisine, there are simple dishes to enjoy with the best local ingredients like olive oil harvested from the Pisan Mountains. Many dishes here are fish-based, but there are also meats like Pisan steak from a local bovine breed. This begins in Florence, an easy road ride for newbies. The challenge ramps up as you head to Vinci, preparing you for the final location, Montaione, a beautiful reward that sits atop a small hill before you return to Florence.

We already talked about Florence and Vinci, but we left Montaione behind. It’s one of those villages that not many people rave about, but it is undoubtedly remarkable on its own. Perched on a high hill, it’s Tuscany’s last frontier. Though it lacks vineyards compared to Chianti, Montalcino, and other nearby towns, Montaione easily makes it up to you with its olive groves, a 27-hole golf course, restaurants, and swimming pools.

Discover Casa Masi, a hidden gem in the area. This rustic restaurant used to be a tobacco warehouse, which was built many centuries ago. Dine here for an exquisite experience, and don’t forget to ask about stories about the furniture pieces in the restaurant. Enjoy a gramigna al pecorino pasta paired with a local Chianti.

Fun Fact: Montaione has some of Tuscany’s priciest villas. This loop ride follows the beautiful river valleys and gorges north of Lucca in Tuscany. The back half of the ride climbs up through the Alpi Apuane National Park then descends west towards the Mediterranean Ocean. Before going back to Lucca, you will have to cycle south along the coast.

Exploring the area takes you to the Carrara marble quarries by cycling at your own pace. It’s an amazing experience to learn about marble transportation and excavation, with hundreds of quarries taking place in the Apuan Alps since ancient Rome. It’s an epic ride and surprisingly peaceful even in the heat of summer. Take this chance to taste local delicacies as you visit the old town centre, including tordelli Lucchesi, a dish filled with lots of ingredients like pork and beef, chard, pecorino, garlic, nutmeg, and breadcrumbs.

Fun Fact: Quarries along the Marble Mountains or Apuan Alps (Alpi Apuane) produce more marble than anywhere in the world. 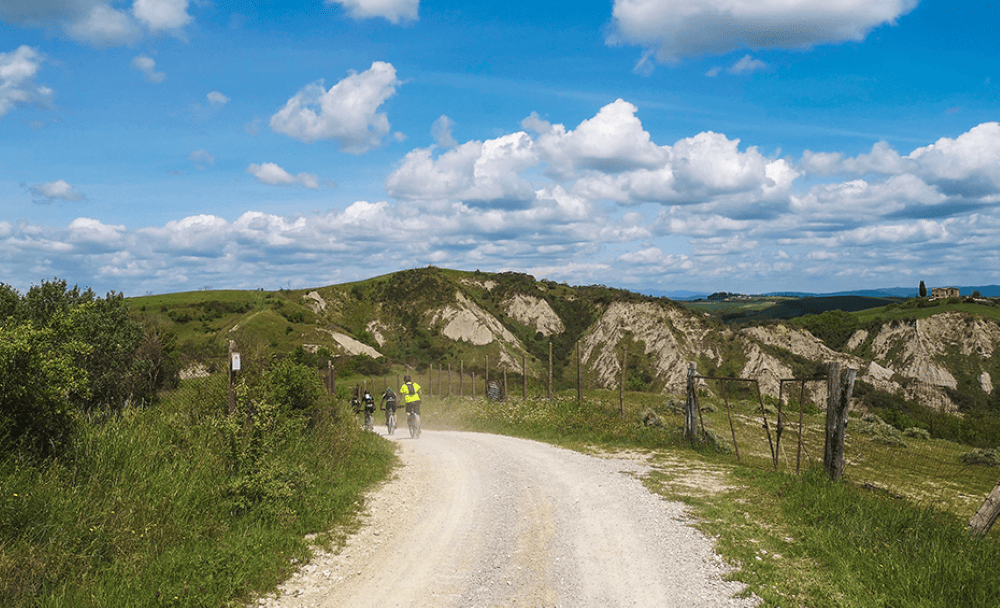 Cycling along the white roads of the Crete Senesi in Tuscany.

Follow the route of the famous Strade Bianche race along “The White Roads of Tuscany”. This route takes the 138km course used for the women’s race, looping out of Sienna in a south-easterly direction.

The 15th Strade Bianche was held on 6 March 2021, starting and concluding in Siena. The “white roads” term refers to the unpaved back roads running amongst the olive groves and vineyards along the pathway. It’s an ideal way of discovering rural Tuscany on your bike but also offers panoramic walking paths. The Strade Bianche race was once called Eroica, an impressive tour that you can take with an e-bike. Two days of cycling will let you enjoy a good speed as you witness the dusty Tuscan while having fun, of course!

Fun Fact: Riders who win three Strade Bianche races will have a section of gravel road named after them. 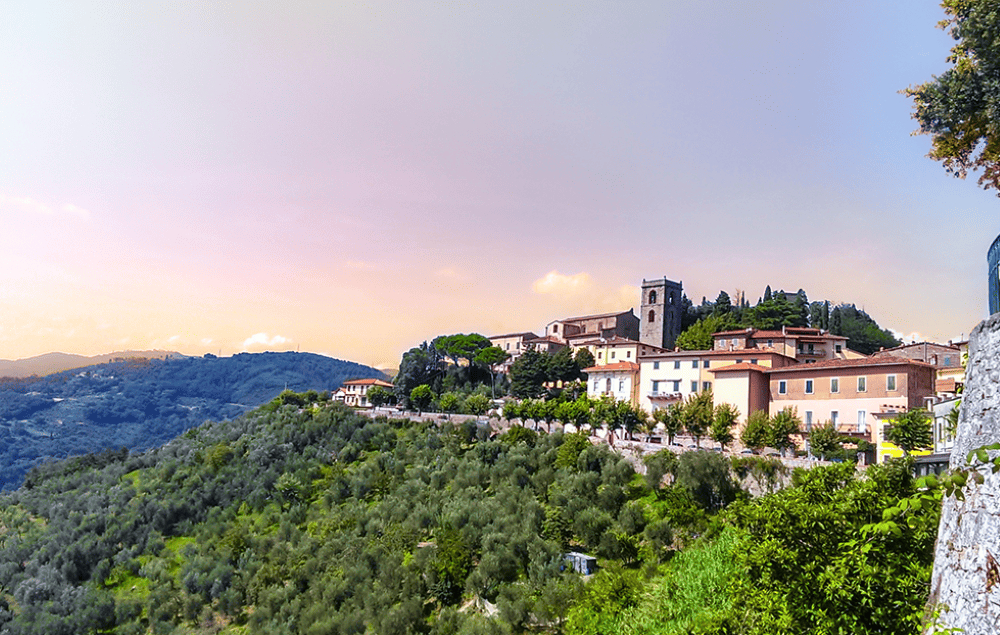 Here’s a wonderful loop ride that explores the foothills and villages of Pisa, Luca, and the river valleys of Montecatini Terme.

If there’s an excursion that lets you understand the most visited Tuscan cities, Pisa and Lucca, this is it. But let’s not ignore the beautiful spa town of Montecatini Terme, which has an abundance of neo-Gothic buildings, stunning landscapes, and fine food and drink. While in Pisa, don’t forget to take a bite of Cecina, an incredibly thin piece of gluten-free bread. It’s made with chickpea flour, oil, water, black pepper, and a bit of salt. Eat it alone or add a flatbread called schiacciatina. This treat is a must-try!

Fun Fact: The Leaning Tower of Pisa was constructed in 1173 but only finished in 1372, taking almost 200 years or two centuries. 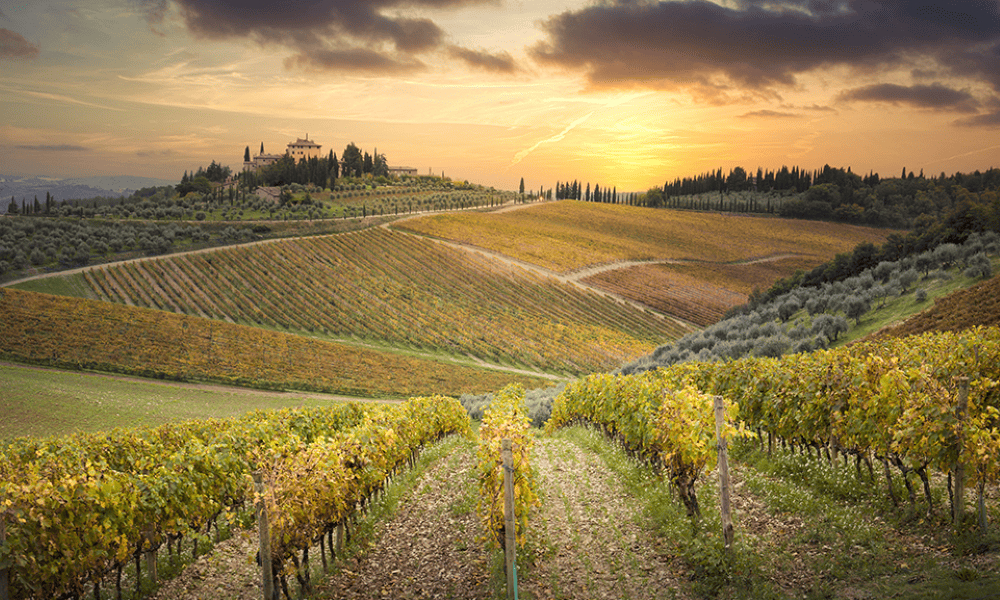 Sunset in Gaiole in Chianti with Chianti vineyards.

Start in San Gimignano to visit any of the 14 towers and see medieval architecture and masterpieces from the 14th and 15th centuries. You can move on to Poggibonsi and then Radda in Chianti. This tiny town perfectly represents a typical Tuscan medieval plan, sitting atop a 533-metre high hill. Head to Gaiole in Chianti, a town surrounded by cliffs and valleys, before returning to San Gimignano.

Gaiole in Chianti is known as the market centre, so expect to see wine and cultural events in the summer. Seize the chance to visit the Ricasoli castle in the town of Vetrine, which is almost in the same condition as it was in 1478. What’s unique about this castle is its rough oval shape. Plus, it has plenty of open spaces, making it a great stop on your itinerary.

Fun Fact: San Gimignano was once inundated with a total of 72 towers (only 14 remain). Back in the days, the more towers a city had, the more powerful and wealthy it was deemed.

As you can see, there is a biking route for you in Tuscany, no matter what your preferences are. Tuscany is a picture-perfect region of Italy with many opportunities and experiences to immerse yourself in, whether in tourist-famous places like Pisa and Florence to lesser-known areas like Vinci and Poggibonsi.

READY TO JOIN US IN TUSCANY, ITALY?

If you would like the opportunity to experience the beauty, delicious food, great cycling, and stunning sights of Italy, then come ride with us on our 2022 Ultimate Giro d’Italia or alternatively let us create a Bespoke, DIY, or Custom Italian, Tuscan cycling or non-cycling vacation for you
For more information reach out, we’re happy to schedule a video call to talk through your needs and questions. GET IN TOUCH WITH US.
January 12, 2022/Written by Grace Fitzpatrick
https://www.rideinternationaltours.com/wp-content/uploads/san-gimignano-tuscany-italy.jpg 463 1000 Grace Fitzpatrick https://www.rideinternationaltours.com/wp-content/uploads/2017/10/ri_logo-340-300x138.png Grace Fitzpatrick2022-01-12 10:36:562022-01-12 15:46:28Our Favourite Places to Visit and Ride in Tuscany

Australian summer holidays in January are the perf

Ride International Tours would like to wish all of

Corsica is a stunning place to visit, it holds a s

Our Favourite Places, Experiences and Rides in Corsica