From the beautiful towns of Calvi and Bastia to the breathtaking beaches and mountains, you’ll never run out of things to do in Corsica. This paradise sits right in the middle of the Mediterranean Sea. Corsica is one of France’s administrative regions, lying at the southeast portion of the French mainland. It’s conveniently located west of Italy and north of Sardinia. Corsica is undeniably a wonderful mélange of French and Italian cultures yet lauded for its vigorous independence.

The weather is a massive contributor to the masses of visitors from far and wide. Corsica summers are unbeatable, with an average temperature of 27 degrees Celsius. Although warm and dry, summertime for the Europeans is spent best lounging on white sandy beaches. Enjoy artisan food and drink, as well as outdoor activities like parasailing, river rafting, and cycling. Corsica is indeed a paradise on Earth.

There truly is something for everyone to see and do on this magnificent island. With natural landscapes, seaports, and historic sites, let’s take a look at our favourite activities in Corsica:

Although Corsica has been a French territory since 1769, it is not a Tour de France mainstay. This world-famous bicycle race took place only once on this island in 2013. But even though that was the case, it’s still an honour to be a part of this historic event. The 2013 Tour de France was the race’s 100th edition, beginning in Corsica and finishing on Paris’ Avenue des Champs-Élysées. The Tour took off on 30 June and concluded on 21 July, completing 21 stages with a total distance of over 3,400 km.

Start your Corsican stay with a day trip on your bike. Cycle through the northern headland of the island, where you will witness an authentic feel of a progressive yet not-too-overdeveloped town. That nice balance is indeed a breath of fresh air. Don’t miss the loop around the north, which is on mostly unspoilt coastal landscapes. The large mountain range is hard to miss, though, as you cycle south. But most of all, the natural beauty of the island is enchanting.

Cycling down the west coast of Corsica, you’ll experience some of the most incredible cycling friendly, and jaw-droppingly beautiful landscapes.

There are no words to describe it but “wow.” Corsica is one of the world’s best cycling destinations.

You don’t need to be a foodie to love Corsica cuisine. It’s mostly a mix of Italian and French, so you know you’re in for a treat. Corsican meals are made of fresh fish and other seafood, local dairy products, such as brocciu or ewe’s milk, goat cheese, and cured meats.

Here’s a hearty dish you’ll surely love to try: civet de sanglier. It consists of stewed wild boar made with red wine, carrots, fennel, and onions. Another favourite is agneau corse, which is lamb slow roasted with potatoes, fresh rosemary, and garlic cloves.

Cured meats and Corsican pork are icons on the island. Some of the all-time favourites are figatellu dry sausages, lonzu (lean steak), and coppa (spare rib). And let’s not forget Corsican cheeses like cabrettu and brocciu, which is arguably the most popular of them all. Enjoy it fresh and plain, or you can add a little bit of flavour using eau de vie (fruit brandy), sugar, or honey.

Let’s talk about how good the local beer & wine is too, off the bike our customers tend to be Food & Wine experience travellers, riding a bike is a good excuse to be able to eat and drink more.

The local Corsican Pietra Brewery produces some unique local beers well worth a sample. On the wine front Corsica has nine AOC wine regions and an island-wide Vin de Corse AOC designation that accounts for two-thirds of the island’s entire wine production.

The Patrimonio region on the north coast was the first to receive AOC designation when it was established in 1968. The west coast is the largest region centered around the island’s capital city of Ajaccio which includes some of Corsica’s highest elevated vineyard land.

The grape varieties are a mix of French and Italian wines that grow well in the Corsican climate. The wines compliment the local food beautifully and offer a nice way to round out a day exploring the treasures of Corsica. 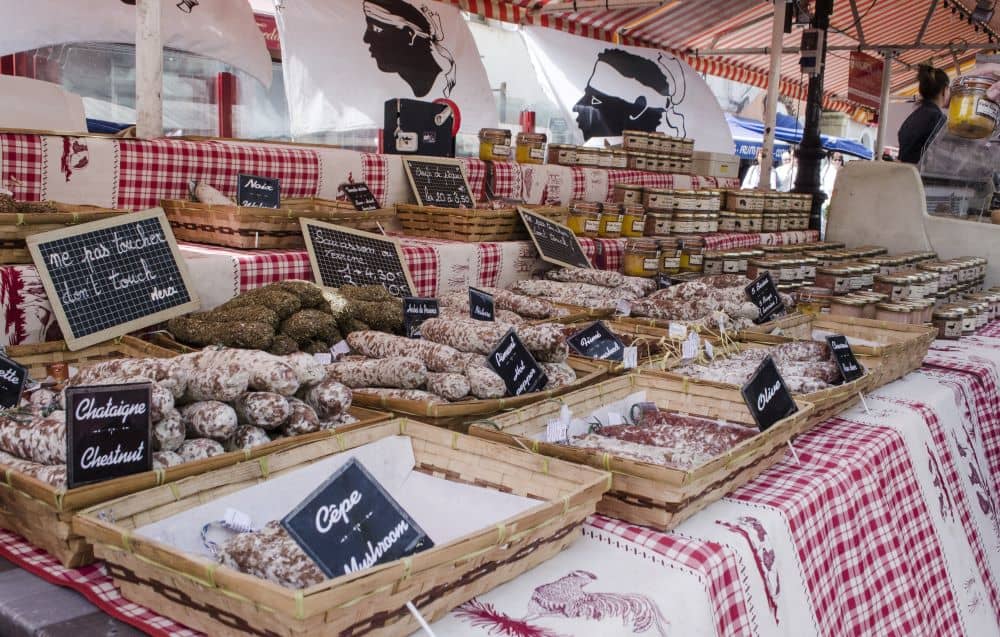 Sausages and other types of charcuterie at the Corsican sausage market.

Corsica is heaven-sent for those who love the great outdoors. Whether you want to road bike, gravel bike, mountain bike, hike, swim, or just take in the scenery, the island will not disappoint. Here is a rundown of the places we recommend you should visit:

Ajaccio: Did you know that Napoleon Bonaparte was born in Ajaccio? That’s why this famous native son of Corsica has a grand square specially dedicated to Napoleon located at the centre of Ajaccio in Place de Gaulle. It has the world-renowned statue of Napoleon that was built in 1865. Ajaccio is also the capital city of Corsica and offers sensational views of the sea throughout the whole town.

Visit Cathédrale d’Ajaccio, a 16th-century structure where Napoleon was baptised. This cathedral has the La Vierge du Sacré-Coeur, a noteworthy painting by celebrated artist Eugène Delacroix. While here, try U bel fiuritu, a French cheese made from sheep’s milk and the special olive oil, huile d’olive de Corse. It’s smooth with a mild taste and devoid of bitterness.

Bonifacio: Here’s a well-preserved town hovering on a steep limestone cliff. You’ll get to enjoy stunning sea views and a jumble of narrow medieval pathways. Bonifacio brims with an undeniable old-world ambience represented mostly by the structures, from the Romanesque church Église Sainte-Marie-Majeure that features ancient Gothic styles to the austere façade of Église Saint-Dominique. By the way, Bonifacio is within Réserve Naturelle des Bouches de Bonifacio, which is Corsica’s largest nature reserve. 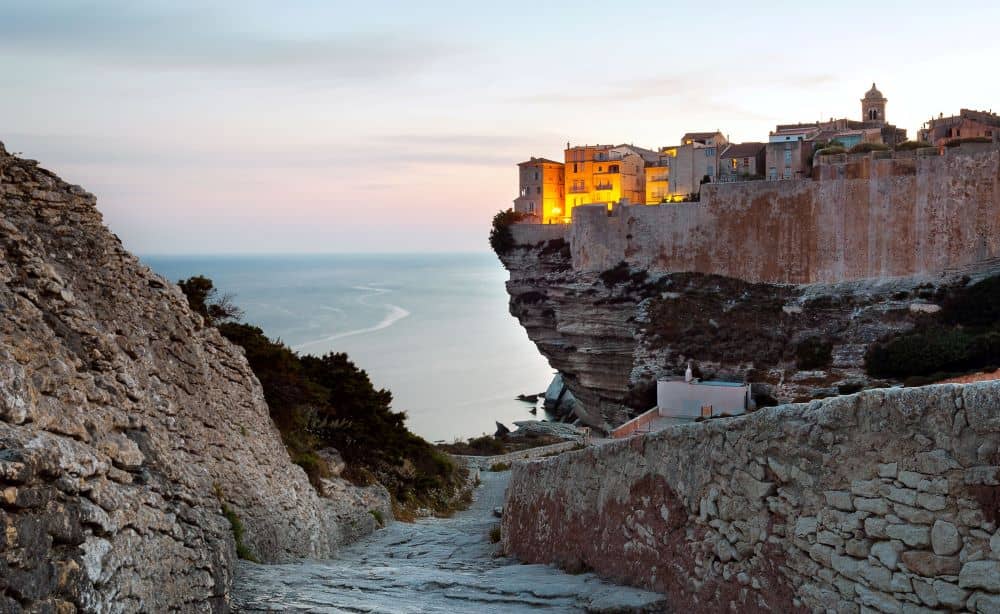 Bastia: To experience the authentic Corsica, Bastia is the place to go. It’s a picturesque harbour and a small town with narrow lanes and noteworthy churches, such as the largest church in Corsica, Église Saint-Jean-Baptiste. For a mesmerising view of the Mediterranean waters, head to Chapelle Saint-Roch. And if you love history, the south of the harbour features an ancient citadel, which has been around since 1378.

L’Île-Rousse: Ready to dip your toes into the waters? L’Île-Rousse is one of the most popular seaside areas in Corsica. It’s on the northwest side of the town and to the northeast of Calvi. The main Calvi-Bastia road passes through the area, making your exploration quite convenient. Head to Place Paoli, where the excitement begins. It’s filled with historical structures, including a Greek temple, which was built in 1845.

A 17th-century tower, Tour de Scalo, is noticeable near the town hall and had many roles in the past, including a museum and prison. But since L’Île-Rousse is a resort town, beaches are everywhere from the north and east of the town centre. Plage du Napoleon offers socialising opportunities where you will find crowds and many beach cafes. But if you want a quieter stroll, head to Plage de Ginepara.

Calvi: Prepare to be astounded by Calvi with its Mediterranean setting and mountains in the background. This seaside town is drenched in the sun, so it’s perfect for a swim or just sunbathing. But the ancient citadel is also a top attraction. Surrounded by imposing buildings, Calvi’s citadel overlooks the sea and is enclosed by cobblestone streets and more historical fortifications. Calvi also draws visitors because of its summertime jazz festival called Calvi On The Rocks, which takes place every year in early July.

Porto: Looking forward to seeing the sights? Hop in on your bike from Porto beach and explore​​ Cargèse via the Calanques de Piana. This, without a doubt, is in our Top 5 rides of all time. Savour the beauty of the natural rock formations of the Calanques de Piana, which you can take in with incredible ease as the road weaves through the exceptional scenery. Trust us; you won’t regret it! Take a stroll through the bustling waterfront in Porto.

Porto Vecchio: Some of the dreamiest beaches in Corsica are right here in Porto Vecchio. It’s no surprise that it has become a top-rated summertime resort. Plage de Palombaggia is the most famous beach with its sandy shore and turquoise water. But don’t forget other beaches like Plage de Santa Guilia and Plage de Rondinara for a less crowded swimming experience. Restaurants and shops abound Place de la République, which is a tourist favourite.

Corsica indeed has a proud identity of its own. Exploring the towns above is the only way to understand why it’s called L’Île de Beauté (The Island of Beauty) by the French.

There’s so much to do, see, and taste in Corsica, which is why we suggest you take some time to experience what this town has to offer. Linger longer, starting in the north or south and move along the west coast. You’ll most likely arrive in Bastia, a seaport town. Although it is Corsica’s busiest seaport, you will surely be glad to commence your journey in this lively place.

Contact us to talk about your Corsican cycling adventure – we can host private groups, individuals and or create DIY programs, contact us to prepare a trip with as much or as little as you need.

For more information reach out, we’re happy to schedule a video call to talk through your needs and questions. GET IN TOUCH WITH US.

Lovely images and vibe reports of the @letourdefra

The spectacular Italian Dolomites are one of our a

Grace Brown @_g_brown has been kind enough to pen

6 Best Places to Visit and Ride in Provence, France