For cycling fanatics, the French Alps are hard to beat. Located in Eastern France, the area is the perfect destination, especially for cyclists wanting to challenge themselves. The region offers tough climbs and is also where many cyclo-sportives are situated for those wishing to take their cycling to another level.

So, if you’re planning to elevate your cycling experience, here are our top 5 Tour de France inspired rides in the French Alps: The 14km climb of Alpe d’Huez is quite possibly the most famous in the world. That’s why it is no wonder that the 21 hairpins of Alpe d’Huez are explored by an average of 400 cyclists each day. By the way, each bend is named after previous stage winners.

Our suggested Alpe d’Huez ride is a loop that includes the classic Alpe d’Huez Tour de France route, on the way up Alpe d’Huez keep an eye out for the 300-year-old farmhouse located at bend 12 in the small village. Pause at the village of Alpe d’Huez for an obligatory photo on the podium, before continuing onto the Col de Sarenne loop. The route is relatively tricky technically, yet absolutely doable for road bikes. 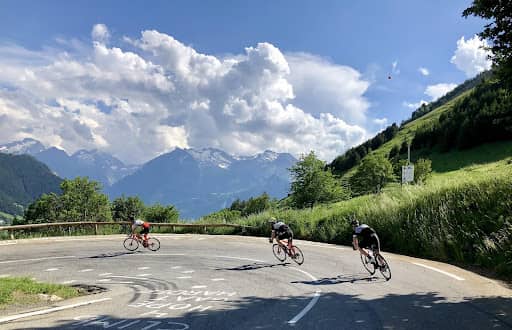 Make sure to take enough water with you. Summer makes the climb much more complicated and hotter, especially with the sun’s reflection off the walls and tarmac. Water is plentiful on the Alpe d’Huez road if you keep a keen eye out and available in La Garde en Oisans at bend 16, if you’re looking for cafes, you will find good choices over at Alpe d’Huez village.

After the village of Alpe d’Huez, our suggested route becomes remote very quickly, here you will need to be self-sufficient as the ride returns along the jaw-dropping balcony roads and back down to the valley floor. The views are stunning, It’s undoubtedly a first-class French Alps experience. This route is an Alpine classic, traversing through high mountain pastures, venturing up the incredible road of the Lacets de Montvernier of the Savoie region. Cycling Col de la Croix de Fer through Col du Glandon is a busy one. There are often plenty of cyclists venturing up to the summit, especially in the warmer months. It’s not surprising because of the opportunity to climb two mountains in one ride. The average gradient for each climb is favourable but expect some steep descents along the route.

Top up with water and food once you get to Le Rivier d’Allemont. It can be tricky to find an eatery along the way. However, you will find a drinking fountain upon reaching the village.

There are two large dams on the route, the Lac de Grand Maison and Lac du Verney. From the peak of Col du Glandon, you can see Mont Blanc, which is the highest mountain in Europe. 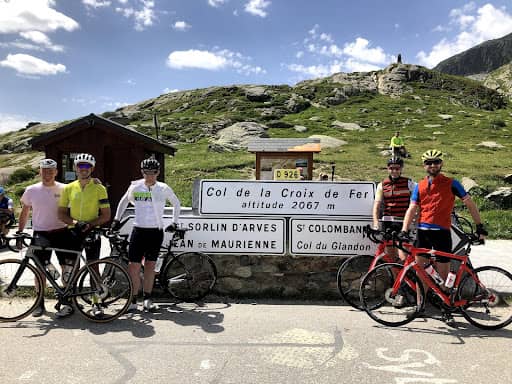 But the trial is not done with 17 hairpin turns waiting as you get to Les Lacets de Montvernier. The way needs to be seen to be believed. Les Lacets de Montvernier is perched on a cliff’s edge. You will want to savour every moment of the experience. The roads are exquisite, and food awaits at the top of the mountain at the Col de Madeleine Chalet. It’s a beautiful climb that’s so unrelenting. Col de Madeleine is an absolute must for any cycling enthusiast. 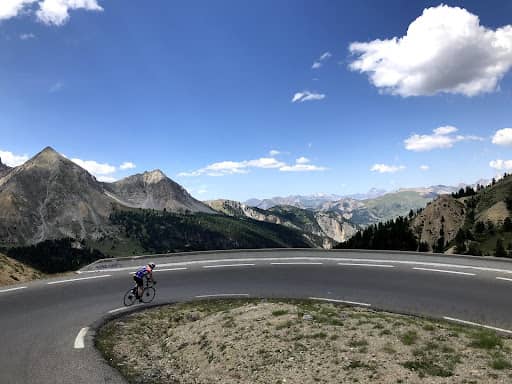 Col d’Izoard has been on the route 34 times previously in the Tour de France since 1922. It’s a classic with a unique experience, including above the tree line where a moonscape awaits. It starts in Guillestre and runs about 31.5 km long. The route gets serious as you arrive at the intersection of the Col d’Izoard and Col de Agnel, be sure to turn sharp left or you may end up in Italy. The first kilometre from the intersection will give you a view of the open countryside. You get a little bit of rest when you reach Arvieux, but the real test starts after that.

Finish your day at the frontier town of Montgenèvre, where French-Italian fusion food awaits. It’s relatively close to Italy and has served as a trading route since the Roman Empire. So, after setting off from Briançon, riding the Col de Montgenèvre Pass lets you in on the Italian border right at the summit of the climb. This pass is not only featured in the Tour de France but also in Giro d’Italia.

Col de Montgenèvre is known as a hikers’ paradise with various paths winding through the mountain. There are ski resorts, including expansive ones reaching the Petit Collet ridge and the Mont de la Plane trail. That means there is an exceptional panorama that showcases the surrounding peaks – the French and Italian. 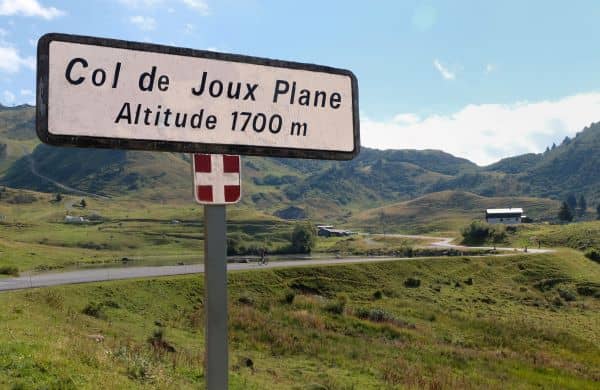 Cyclists love Col de Joux-Plane, which is a renowned major pass of the French Alps. However, it is not for the faint-hearted. It is complex even for the experienced Tour de France and Dauphiné Libéré riders. Climbing Col de Joux-Plane needs rigorous training, but surely the effort is well worth it. One reason is the view over Mont-Blanc, which is so rewarding.

Chamonix is a favourite location of ours deep in the Central Alps. It’s a stunning ride that starts at the base of Mont Blanc in Chamonix. When here, get ready for this iconic alpine location, which is abuzz year-round for Alpine adventures. Follow the railway that leads to Mer de Glace, allowing you to explore the glacier and ice sculptures along the way.

But on a clear day, don’t miss the chance to experience riding the world’s tallest cable car. You will get to the top of Aiguille du Midi, which proudly stands 3842m. Prepare for some awe-inspiring Mont Blanc views and nearby peaks.

Sixt-Fer-à-Cheval, on the other hand, is a stunning Alpine landscape and viewpoint. The journey from Chamonix to Sixt-Fer-à-Cheval is about 71km. Your Morzine excursion begins here. You will easily spot the Sixt-Fer-à-Cheval National Park when you pass the Col de Joux-Plane, offering you spectacular scenery in the Alps.

Sixt-Fer-à-Cheval is home to several wonderful attractions, including Lac Blanc, a much sought-after lake, especially for hikers. It is a charming village with remarkable natural beauty and classic architecture. Most of the buildings have a distinct traditional design with wooden and stone chalets scattered all around. There are also ancient structures and old farmhouses that display the rich history of the area.

Col de Joux-Plane to Morzine is considered a significant test even for seasoned cyclists. Col de Joux-Plane became a part of the Tour de France in 1978 and since then has been used a total of 12 times. Because of how tough it is, Col de Joux-Plane is often featured as the last major climb of the stage.

A classic Tour de France Alps climb, Morzine is a wonderland in summer and winter. It’s the perfect route after the gruelling Col de Joux-Plane. Cycling in Morzine gives you an altitude of 1000m. During winter, you will find loads of snowboarders and skiers. Snow-clearing, though, is quite efficient, so you will not find it difficult to traverse through the pathways even if you cycle in the middle of November to April. However, the temperatures are often below freezing point, so cycling can be a real challenge

We recommend cycling between May, June, July and September is also a wonderful time, especially if you want a quieter road. Col du Galibier is among the highest altitude climbs in the French Alps at 2642m. There are two routes for you to choose from, with the first one being the ascent from the north side. You begin the journey in the Savoie region of France for this route. The other option is the south side ascent, which starts from the Hautes Alpes region via Col du Lautaret.

Col du Galibier has been featured in many of the Tour de France stages over the years. The most recent is in 2017. It is also quite popular in amateur cycling competitions, including Marmotte Granfondo, which takes place each year. The road is accessible before May ends until early November, it all depends on the snowfall percentage, it’s always best to check the weather before planning or setting off on your ride.

The ascent to Col du Télégraphe is not demanding and is, in fact, relatively steady with a gradient of just over 7%. Most of the route is right on a tree-lined road, so you do not have to worry about enjoying some shade during scorching days. If you’re famished, try the restaurant at the top of the col. From here, there is a 4km descent towards the Valloire ski resort. It’s a great way to take a short break for your legs, so you have more energy for the next climb. You can also find some restaurants and shops in Valloire. After descending, you will once again climb up a gentle gradient for about five kilometres. But expect that it will only get more challenging with slopes from 7 to 10 per cent. Replenish your water bottles from the sources along the main road. The final water source is at a refuge about 8km below the col. You will also find a snack bar before the col on the south and north sides.

You can descend to the south side from this col, which means you will reach Col du Lautaret, which has an altitude of 2058m. You will find the route approximately 8km below the summit. Turn right to get to Le Bourg d’Oisans; otherwise, you will head to Briançon if you go left. 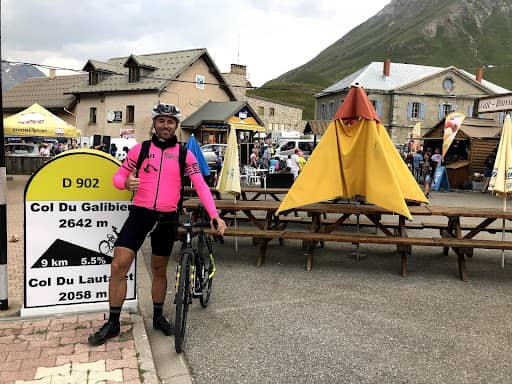 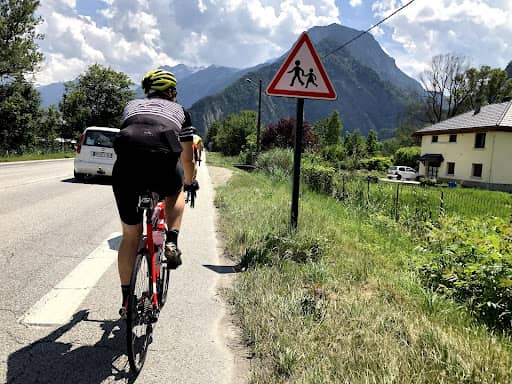 One more must-do Tour de France ride in the French Alps is Grenoble to Chamrousse. The ascent is exciting as you reach the Chamrousse ski resort. It’s situated high above Grenoble and has been featured in the 2001 Tour de France for the Time Trial stage. Renowned cyclist Lance Armstrong won the race.

The routes begin in the beautiful spa town called Uriage-Les-Bains. Broad, sweeping roads complete with fantastic views of the valley below and the majestic snow-covered Alps are enough to include this route in this list. 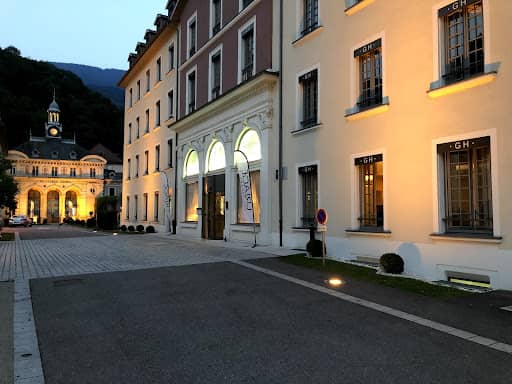 For more information, GET IN TOUCH WITH US.

Lovely images and vibe reports of the @letourdefra

The spectacular Italian Dolomites are one of our a

Grace Brown @_g_brown has been kind enough to pen

6 Best Places to Visit and Ride in Provence, France
Scroll to top